“To be overcome by the fragrance of flowers is a delectable form of defeat.”  Beverly Nichols

Close up of a beauty in the local garden of master grower, E’Ni Foo

I discovered Chinese Tree Peonies about 10 years ago at the Philadelphia Flower Show and have been in love with them ever since.  To behold a Tree Peony is to become smitten.  Yet I find they are not known to many gardeners. Chinese Tree Peonies have often been classified as exotic plants but can successfully be grown in many climates.  They are a cultural symbol in their native China, where they are called mùdān, and have been revered for more than 2,000 years.  Tree peonies are considered the king of flowers and symbolize friendship, fortune, feminine beauty, elegance and honor.  They were named the national flower of China in 1994. 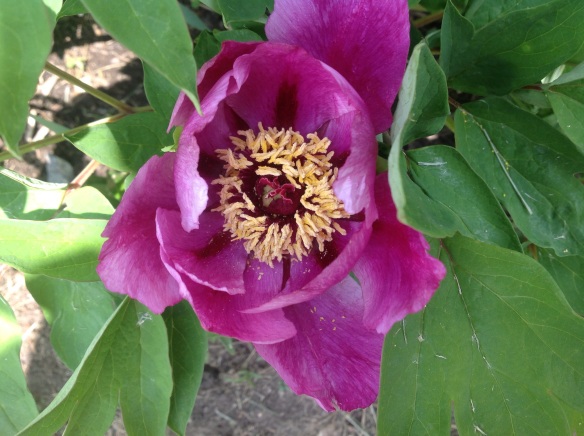 1 year old specimen in my garden, which has yet to produce flower buds. 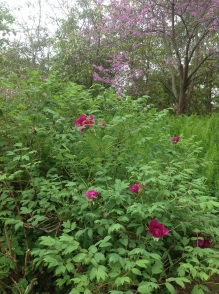 A 10 year old shrub also in my garden.

Photo from the E’Ni Foo garden.

Unlike herbaceous peonies which are better known, tree peonies  are deciduous, spreading shrubs, growing to about 4 feet in height and of greater width.  They are best planted in fall so their roots can establish themselves during dormancy. Tree peonies are easy to grow.  I love that they flower before the herbaceous peonies and at the same time as azaleas.  They extend the season of peonies in the garden.  They don’t require staking as their woody branches support the weight of the flowers.  They do not attract ants like their deciduous cousins.  They  require fertile, well drained soil and tolerate  partial shade.  They can withstand temperatures as low as -20F.  They grow slowly and once established they require little maintenance.

A very healthy specimen with abundant flowers in the Foo garden 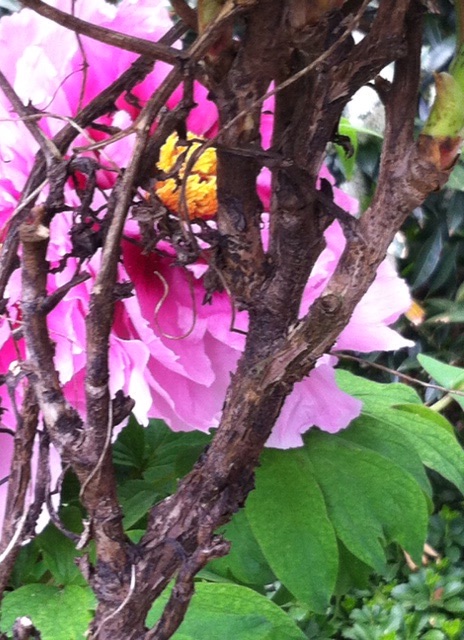 Note the woody branches of the tree peony.

The woody stem is strong enough to hold up the large and heavy bloom without staking.

Now prized for their often dinner-plate sized blooms with intoxicating fragrance, they come in shades as soft as white and pale pink to flamboyant hot pinks and purples.  Their names are as exotic as their blooms:  Green Dragon Lying on a Chinese Ink Stone, Tipsy Imperial Concubine, Princess Zhao Marries Beyond the Great Walls.  They were originally cultivated for the medicinal benefits of the bark of their roots.  In fact during the Maoist cultural revolution from 1966-1976 they were regarded as a bourgeois affectation and many were destroyed by the Red Guard.  If the guards could be convinced they were being grown for medicinal purposes, some specimens could be spared this horrid fate.

A Drunken Concubine tree peony flower. Magnificent and the size of a dinner plate!

Luoyang, a city in Henan Province in Central China is considered the peony capital of the world.  It hosts the famous Luoyang Peony Festival from mid April to mid May every year.  There over a million peony trees  in bloom and over 1,200 different varieties showcased.  Peak viewing is from April15-25th.  Luoyang is a 4 hour train ride from Beijing.  To tour the famous Luoyang Peony Festival, please click on this short video clip by Lucianno Bosticco,  courtesy of Vimeo.   https://vimeo.com/68792631 The peony is revered in China and appears in many decorative items.

A  beautiful fan with tree peonies on silk, a gift from a Chinese friend.

A favorite silk scarf, a gift from my Chinese friend Hui, who is from the Luoyang province, home of the first known peonies. An artful celebration of peonies on silk!

A harmonious pairing of Chinese Tree Peonies in the foreground and azaleas in the background in the magnificent gardens of the local Foo family home. 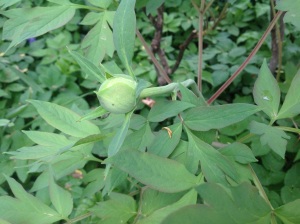 My Itho hybrid is just now budding and will bloom with magnificent yellow flowers, edged in orange.

Tree peonies have been extensively hybridized thanks to Chinese, Japanese, French, German and American growers. The hybrid tree peonies are more readily available and at better prices than in the past.  These shrubs however are still pricey but they are great performing plants and can last decades in the right growing conditions. Yua’s Yellow is still available today and thought to be one of the oldest varieties going back to 1034.  The Itho varieties are actually intersectional hybrids, an intermediate between tree and herbaceous peonies. 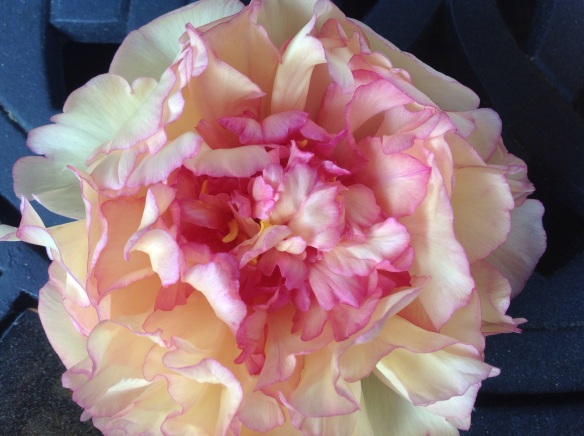 Because the flowers are intricate and spectacular on their own, I usually float a single bloom to create a very simple arrangement. 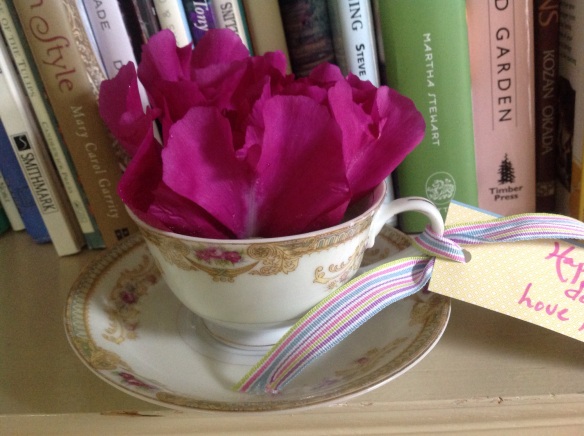 One of my favorite ways to display or gift a single, magnificent bloom: floating in a teacup where its intricate center can be admired by the recipient.

Floating a single bloom in a glass pedestal vessel is one of my favorite ways to enjoy my tree peonies. 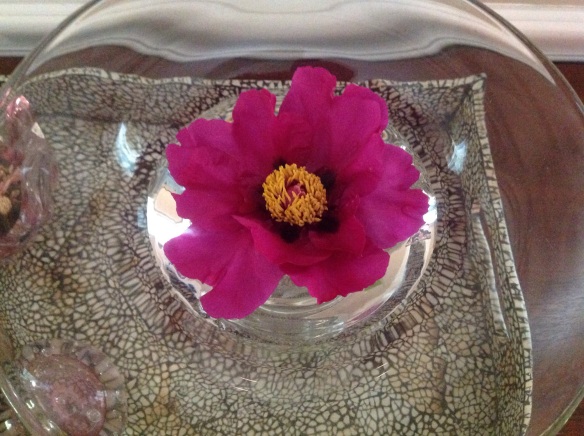 Detail of a floating peony. 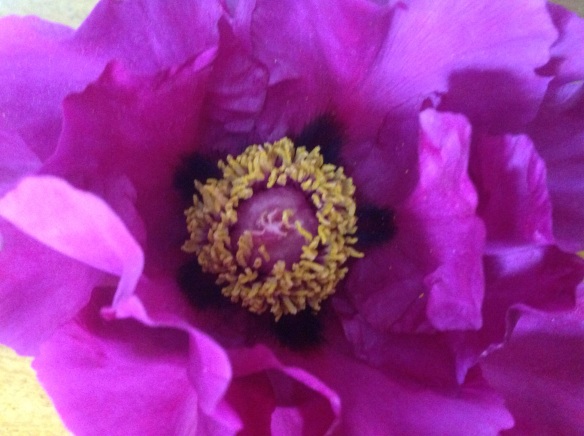 The first tree peony to bloom in my garden.

I hope I have helped you discover Chinese Tree Peonies or learn something new about them! Special thanks to Dr. E’Ni Foo for graciously allowing me to photograph many of his exquisite tree peony specimens for this post.  His private garden is a sight to behold and a privilege to visit. References:  NY Botanical Garden; The Peony Society; Fragrantica.com