Tourtière is the traditional Christmas Eve dish in French Canada.  A lightly spiced, finely ground pork pie enveloped in a flakey melt-in-your-mouth crust, it is the center of the réveillon, a midnight feast served after Christmas mass.  The addition of cinnamon, ground cloves and allspice is what makes this savory pie so unique.  Served by generations of Québécois families, it is a memorable tasting experience should you be lucky enough to be served a slice.  So beloved, it has spread far beyond the borders of the province of Québec where it originated. 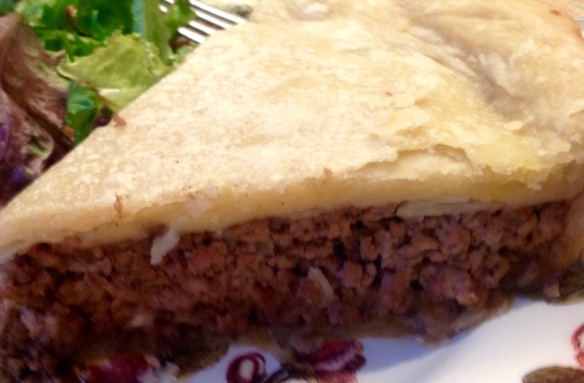 French families throughout Canada and immigrant families in New England have kept the tradition alive.  There are many regional variations and often even variations within one family.  Some add veal, some mix in game meats and some recipes include potatoes.  Of course I think my maman’s recipe is the very best!  Hers is made with finely ground pork. Tourtière is all about the meat, so source a good butcher to get it at optimal freshness.  Water is added to the meat and it is cooked down for more than an hour. Then the fragrant spices are introduced to create the distinctive taste sensation. A handful of oats is added at the end as a binder.  The cooked pork is strained of excess fat so the pie is lean but rich in flavor.  This is a completely make-ahead dish and it can be frozen for up to a year.  Growing up we had tourtière Christmas Eve and looked forward to it all year.  Here in Pennsylvania, grandmaman makes enough for her grandsons to enjoy all year.  It is usually served with a condiment such as ketchup, chili sauce, green ketchup or chutney.  Tourtière is one of Canada’s most delicious contributions to the culinary world.  It is THE smell of Christmas in French Canadian homes.  And boy,  does it smell divine!  Joyeux Noël!

Method:  In a large bowl, cut the shortening into the flour with 2 knives until the mixture is uniformely coarse, about the size of dimes. Gradually add water and shape into a ball with your hands. Divide the dough in half.  On a floured surface, roll out the dough.  Fit one crust into a 9 inch pie plate.  Reserve the second crust for the top of your tourtière. 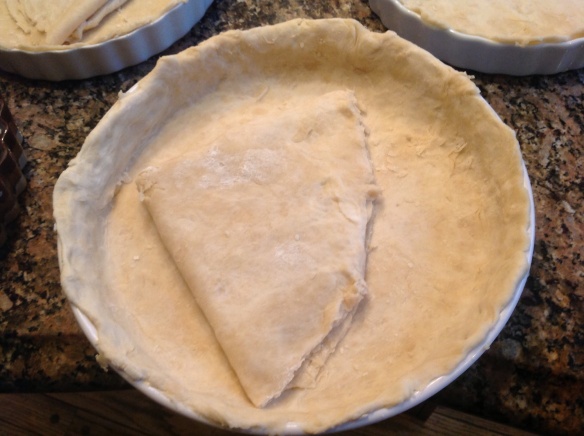 In a large Dutch oven, cook the onion and garlic on low heat in olive oil until translucent and soft.  Add pork, and cook over medium heat while stirring, until the pork browns.  Add water so that approximately 3/4 of the meat is covered.   Stir, cover and simmer for about an hour to an hour and a half, until most of the water has been absorbed.  Add the oats and cook for another 10 minutes with a vented lid.   Stir in the spices, salt and pepper.  Let cool to room temperature.  Strain any remaining liquid or fat out of the meat. Fill your unbaked pie crust with the seasoned pork.  Top with the second crust, cutting slits for venting.

Bake at 375F for 40 minutes until the crust is golden.  If freezing, cool completely before wrapping in foil.  Bake frozen at 375F for 1 hour.

Note:  The spices can be adjusted according to taste.  If you like cinnamon more than cloves you can adjust quantities.  Pierrette, like all great cooks, works by taste and it is difficult to get exact measurements of the spice combination which is the secret to the awesome taste of her tourtières.  I noted 1 teaspoon  cinnamon, 1/2 teaspoon allspice and 1/4 teaspoon ground cloves in one session of documenting this post while observing the master at work!  In another session, I noted the combination of spices in the recipe above. 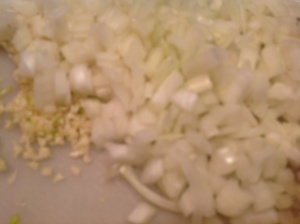 In a large pot, soften the onions and garlic in a bit of olive oil. 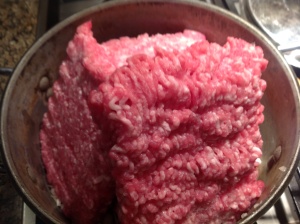 Add the ground pork and cook until browned, adding salt and pepper 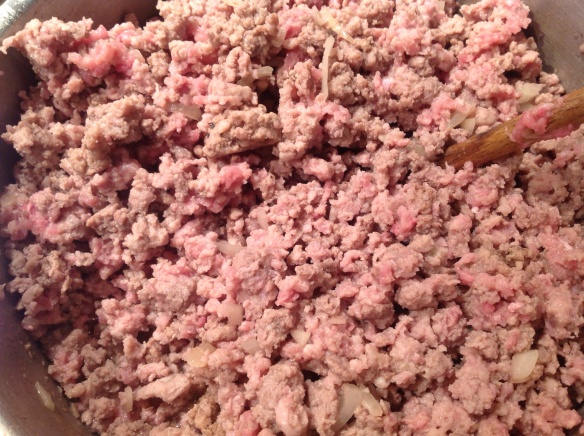 Seasoned and browned pork.  To this you will add water and slowly cook it for an hour and a half.  The oatmeal is then added followed by the spices. 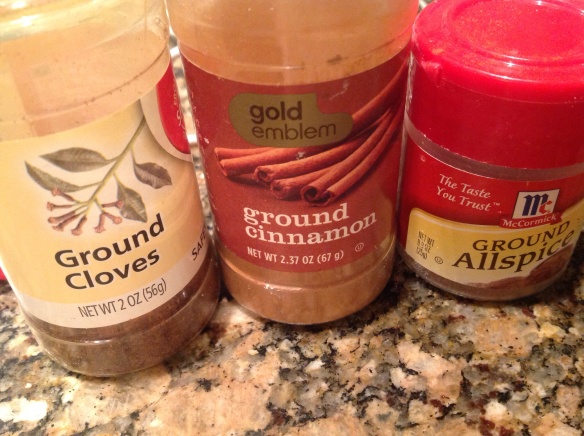 The spices that give tourtière its distinctive flavoring 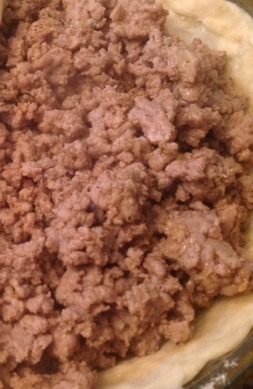 The lean-seasoned meat mixture, thickened and strained of excess water and fat. 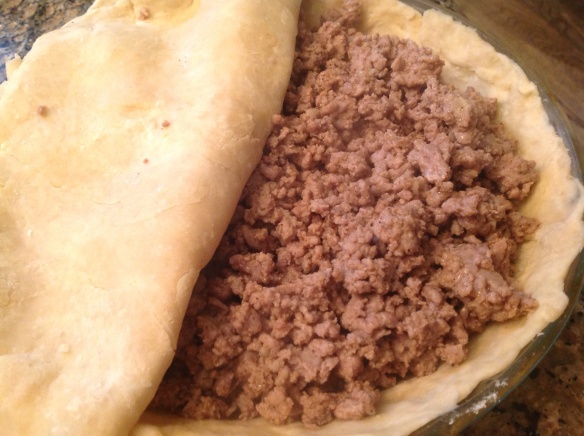 Filling the unbaked pie shell with the savory pork mixture. 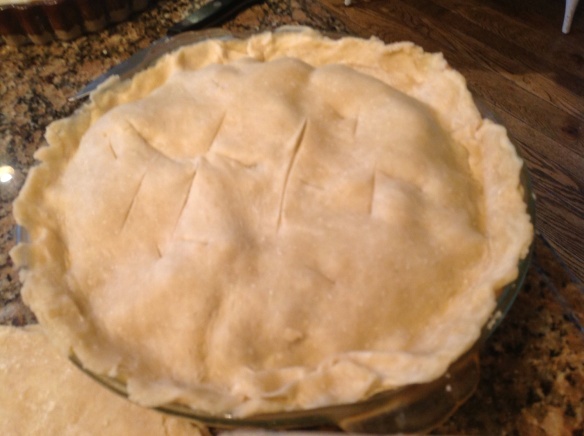 The meat pie ready to go into the oven 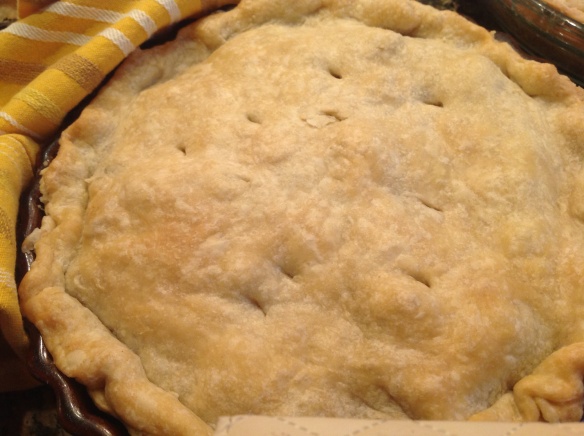 A golden beauty ready to serve or to freeze, after cooling, for up to a year 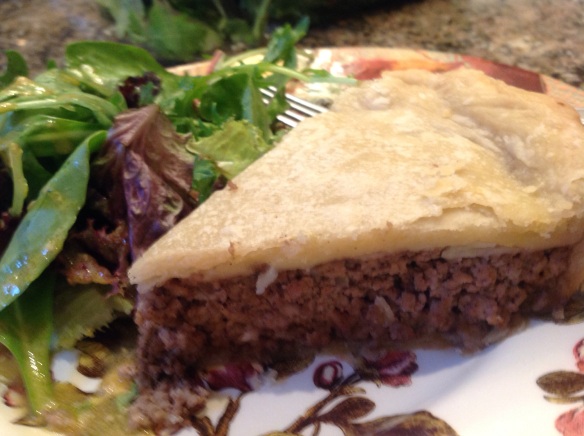 With a green salad on the side, a slice of tourtière is a satisfying meal. 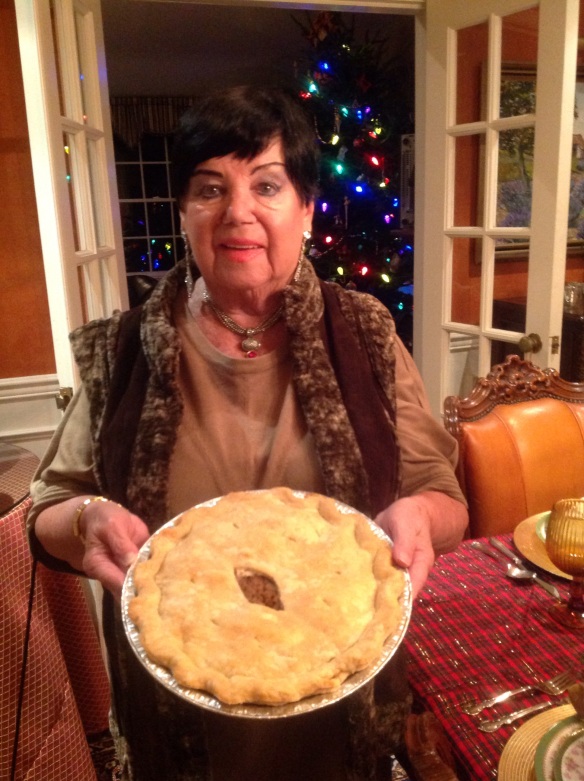 My beautiful 83 years young maman, the famous Pierrette,  with one of her delectable creations!